Along with our human neighbors at Quail Run, we also share the land with wildlife visitors—coyotes, fishers, turkeys, hawks, and owls, among others. All have been occasionally sighted throughout Quail Run. Coyotes and fishers are predators, so to protect your dogs and cats, keep them indoors and when outdoors, keep them on leash. It’s also a Quail Run regulation and Woburn municipal law to do so. 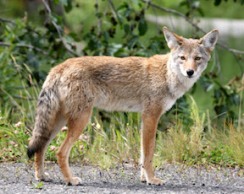 From time to time, coyotes are spotted roaming Quail Run. They are generally wary animals that avoid people at all costs. Over the last 60 years in Massachusetts, there have been less than 10 attacks on a human by a coyote. However, they are omnivores and pets are potential prey. To decrease the chance of attracting a coyote, do not leave anything they might feed on outdoors and avoid coyote pups at all cost. Learn more about them here at the Mass Audubon site.

Often called fisher cats, fishers are members of the weasel family. They have a long, low profile when moving along the ground and average 32 to 40 inches in length, including a tapering, 12 to 16-inch tail. Their coat is dark brown, dense, and glossy. They tend to be quiet and the screaming noise attributed to them is often that of a fox.

There have been fisher sightings at Quail Run, but generally fishers are secretive and elusive creatures. They keep their distance from humans and do not den under buildings. Like coyotes, they are omnivores, so keep you cat indoors or on a leash when outdoors. Learn more about them here at the Mass Audubon site.

They’re everywhere, including downtown Boston. Quail Run has a flock that wanders around the property and environs and in the spring you might see a hen with her chicks. Generally they mind their own business, but can be attracted by bird feeders. They can become aggressive and even attack their own reflections, but these instances are rare. Learn more about wild turkeys here at Mass Audubon.

With regard to other creatures living with us at Quail Run, remember,
It’s the law. If it poops, you must scoop!

If you have an announcement or tip you think would be of interest to your fellow Quail Runners, go to the Tell Us About It! page, fill out the form, and click Submit.